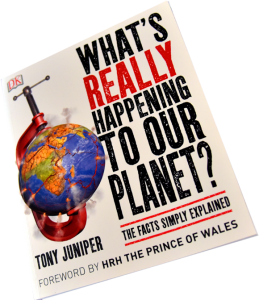 “What’s in the package?” my teenage daughter shouted excitedly as I opened the envelope containing a copy of Tony Juniper’s ‘What’s Really Happening to our Planet?’ book. And as she feigned interest before returning to the computer to play Sims with her friends I was struck by the irony that Dorling & Kindersley had published this book. Back in the 90’s DK’s educational CD-Roms – known as DK Multimedia, had fascinated and excited my older children. They could get information, on such topics as the human body, without needing to read too much and what’s more they could interact with it! So nearly 20 years on a book, even one with lots of interesting infographics, has to work hard to capture a young audience.

That said, pulling together the complexities of the issues that affect our planet is no mean feat. There are some alarming facts in the book, such as ‘Energy use up five-fold since the 1950’s’; not surprising given our growing population. And in DK style the information is presented crisp and clearly, with bright charts and colourful graphics to communicate the woeful state of our planet.

As well as the changing climate, the rising sea levels and resource depletion, the author covers the problems of world debt and wide spread corruption as well as the rise of consumerism and challenges of the waste we produce.

It’s a great resource to dip and out of for snapshots of the threats posed to our planet. I can see it being useful in schools and colleges.  What’s good about having a good old fashioned book  is that you can flick through and find things without being led by specific Internet searches. Perhaps that’s why sales of books are on the rise.  However, I hope that it will be available in app format too. 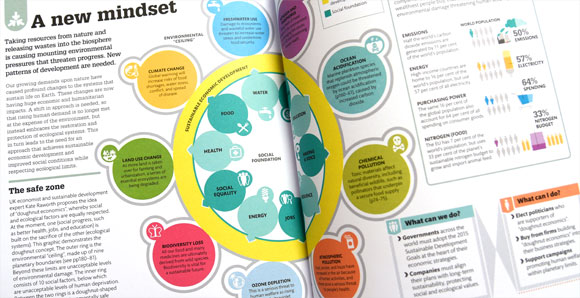 It’s hard not to feel overwhelmed by all the fact and figures and to feel powerless to change anything. Some sections of the book do include what individuals and society can do, but I had to look hard to find them. There are simple things such as eating less meat, using energy efficiently; recycling and using greener forms of transport that could help reduce the impact on our planet. But the really big dilemmas such as population expansion, the impact and needs of the developing world and squaring economic growth whilst sustaining a healthy planet, require more than us making green choices.

Perhaps persuading the games developers Maxis that Sims 5 should be ‘Sims Save the Planet’ could help influence the decision makers of the future. If we don’t look after it, mankind and the planet will die.