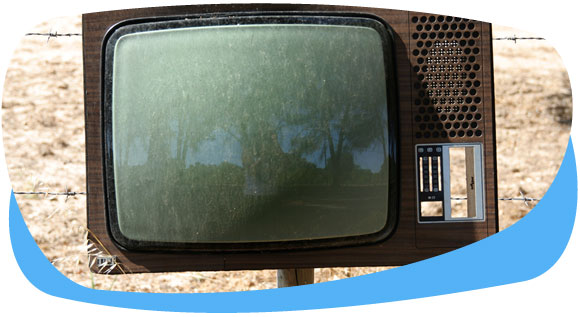 Radios, televisions, hi-fis, video and DVD players, home cinema systems and so on all use energy. Between them, TVs and videos already account for 75% of all electricity consumption within the consumer electronics sector. As well as CO2 emissions, all this energy costs money, see Sust-it.net for the running costs spelt out on an hourly/daily/yearly basis.  Although improving, energy is used even when the appliance is in standby mode. The Energy Saving Trust says TVs use 3-7W in standby, compared to 140W when switched on, and they estimate that the average household wastes £37 each year by leaving appliances on standby and now spend around 10% of their electricity bill on standby power.

The technology used is changing rapidly, with analogue being replaced by digital and cathode ray tubes (old fashioned televisions) being replaced by flat screens, plasma TV and LCDs. As a guideline, newer televisions use less energy than old, larger ones use more than smaller ones, and plasma TVs use much more than either cathode ray tubes or LCDs. Sony claim that LCD televisions use up to 30% less power than plasma. Sharp have been awarded the Energy Saving Trust’s ‘energy saving recommended endorsement’ for some of their LCD TVs. Samsung say their plasma TVs are Energy Star qualified products generally consuming less energy than similar standard products and that the power consumption of plasma TVs at standby mode is less than 1W.

When buying a new TV, as with any other electrical appliance, find out how much energy it uses, check out Sust-it.net, before you buy. Taking long term running costs into your buying equation, makes sense. Look for ‘Energy Efficiency’ labels and, when you get it home, don’t leave it on standby.

Research done by Sust-it, the energy efficiency site for electricals, shows that TVs are now, on average, sixty per cent more efficient than they were five years ago.

When plasma and LCD TVs first arrived in the shops, we were dazzled by their stunning picture quality and screen size, and overlooked the fact that, compared with most tube televisions, these beasts were energy guzzlers – something the salesman, wowing us with bright colours and a 42 inch screen, would neglect to mention. In 2006 a 42 inch Plasma could have cost you £78.80 per year to run (at today’s prices), now thanks to public awareness and advances in technology, a similar model uses nearly six times less energy, produces 264.90 kg less carbon and costs only £13.76 to run per year.

Sust-it used its extensive energy usage data to compare the running costs of 1,800 televisions and found that since October 2006 and July 2011, there has been a decrease in the average amount of energy flat screen TVs are using, and, in addition, the decrease in stand-by consumption is nearly 100 per cent.  This is better news for the environment, as TVs account for around 6-8% of the global domestic electricity usage, and for the consumer by saving them money on electricity bills.

Sharp, whose TVs top Sust-it’s efficiency charts, commented on the research saying “Sharp have made increasing energy efficiency a key part of its wider commitment to minimising the environmental impact of product lifecycles. Technological advances are made not only to improve picture quality, but also to reduce energy needed to power the screen.  For example, the added yellow sub-pixel in Sharp’s proprietary four colour Quattron LCD panels allows more light through, using less energy to produce a brighter, sharper picture. Where ten years ago, a 32-inch TV would have consumed nearly 300 kWh (kilowatt-hours) per year, the same size Sharp TV now requires 80% less energy when On, and an amazing 98% less in stand-by mode.  This is why so many of our TVs have already received the A or A+ energy efficiency rating.”

See the most energy efficient TVs on Sust-it.

Like all mains-powered electrical devices, TVs emit electro-magnetic fields (EMFs). These EMFs have been linked to health problems – see Powerwatch for more information. The advice is to turn off the TV at the mains (TVs continue to emit EMFs even when they’re off) and to sit at least six feet from the screen when it’s on, but the best option remains to relegate TV use to a minimum and live life in the real world instead.

With radios there’s a very environmentally-friendly option: buy a clockwork radio! The classic is the wind-up Freeplay radio, designed by Trevor Bayliss, which now comes in several different styles, including ones with solar panels to help charge the batteries. Some are AM-FM, some receive long-wave, there’s even a digital-multi-band solar/wind-up radio complete with built-in clock/alarm. Many green suppliers sell some – see our list of online shops. The Centre for Alternative Technology also sell a kit for building your own crystal radio.

« Fridges & freezers
Is it greener to hand wash or use a dishwasher? »