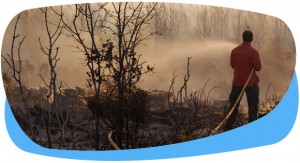 The world’s holiday destinations are changing in any case and the impact of climate change is being felt globally. Tourism-dependent regions like the Caribbean are under threat due to rising temperatures, coral bleaching and increasingly frequent droughts limiting water availability. Many areas are subject to worsening water shortages and wild fires. Storms will increasingly be stronger and more frequent, and rainfall will be more intense. Summers will be longer, but ski seasons will be shorter, and lower-altitude resorts will find themselves without natural snow. If they resort to making artificial snow, this is also very damaging due to the amount of water taken from streams and the additives used.

Glaciers are melting – the US’s iconic Glacier International Park, once home to around 150 glaciers, now hosts only 30, and it’s estimated that the rest will disappear within the next 30 years. Kilimanjaro has lost 80% of its ice since 1912, and the Arctic Ocean may be ice-free in summer as soon as 2044 (opening up the possibility of cruises through the North West Passage, which was ice-free for the first time in 2007). The polar regions are seeing the fastest temperature increases, with the Antarctic Peninsula predicted to continue warming at a rate of 0.34°C per year until 2100.

« Greener holidays
Reduce the impact of your holiday – go by ferry! »