Greenpeace, as part of its Toxic Chemicals campaign, highlighted the use of chemicals which are on the European Union’s list of chemicals ‘of Very High Concern’ – that is substances that persist in the environment, build up in the human body, or may cause cancer, damage genetic material, damage the reproductive system or disrupt the hormone system. Vinyl floor coverings, according to Greenpeace, contain phthalates and sometimes chlorinated paraffins, organic tin compounds and other toxic substances, some of which are known to leach out. Cork tiles get a green rating from Greenpeace, meaning that, as far as they have been able to ascertain, the product is free from ‘chemicals of very high concern’. However they add that some sealed cork tiles are coated with PVC which contains phthalates, organotins and alkyphenols. 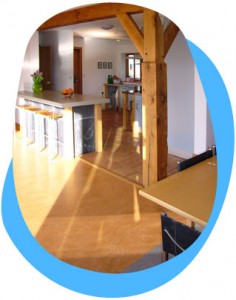 Lino (linoleum) is not the same as vinyl and is made from natural raw materials, is very hard wearing and naturally antiseptic. Forbo Flooring manufacture Marmoleum, which they explain is a natural linoleum product using raw materials from renewable sources including very finely ground limestone, wood flour, resin, cork flour, pigments and linseed oil with a natural jute backing.

Carpets are made from a variety of materials, including wool and polypropylene. Wool carpets may be treated with a variety of chemicals, including those categorised by Greenpeace as ‘of very high concern’, such as brominated flame retardants and organotins. But some manufacturers have told Greenpeace that they are committed to phasing out harmful chemicals and a few have explicitly said their products do not contain harmful chemical pollutants. It is worth asking. In their section on ‘product integrity’ the John Lewis Partnership say ‘our strategy is to stop using all chemical substances known to be directly hazardous to human health, where safer alternatives are available’. Construction Resources point out that ‘to carry the Woolmark label, wool has to be treated with pyrethroids, which act as nerve poisons, and their use in carpets has been banned in the USA for 15 years’. Other concerns are synthetic dyes, synthetic latex which, unlike natural latex, is not biodegradable, and fire retardants. Some natural materials such as sisal may have synthetic latex backing.