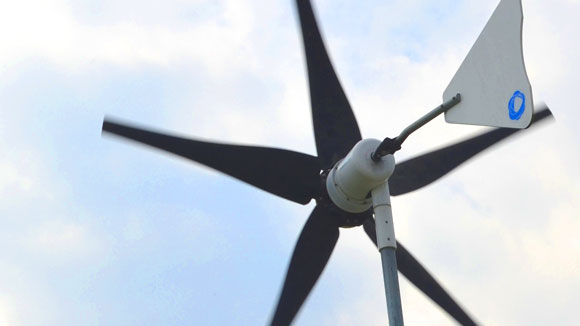 We’d noticed that during the past couple of years our turbines have been spinning a lot less due to a change in wind direction – from a South Westerly to a North Easterly. So it’s disappointing, but not surprising to have it confirmed by the Department of Energy and Climate Change (DECC) annual Energy Statistics, that the amount of energy created from on-shore wind turbines dropped by 7.7 per cent in 2010. That’s despite a 14 per cent growth in the number of turbines last year, so the decline per turbine in actually much greater.

According to DECC’s figures the average output from Britain’s 275 onshore wind farms fell to the lowest level on record, due to a drop in wind speeds. The report said: “Ten months of 2010 saw lower wind speeds than the ten-year average.”

So how can we keep the lights on? December 7 last year, must have been a cold day because we saw the demand for electricity at its fourth highest level recorded, and wind farms produced only 0.4 per cent of the power needed by the country. This opens up the argument for opponents of wind farms, claiming that if the government relies too heavily on this sector, we will see power cuts.  So is it inevitable that nuclear got to be part of the nation’s future energy mix? Can’t we come up with something else?  And we can still do more to reduce our energy consumption, all the things we’ve heard before…. Putting on an extra jumper, insulating our homes better, buying energy efficient appliances. But we’ve still got to find a safer solution to our energy needs, as, no matter how windy it gets, on-shore wind turbines can only generate a small amount of energy. Let’s hope it’s a long hot summer for all those people who’ve invested in solar PV panels!