Central heating became a standard feature of British houses with the arrival of cheap North Sea gas. It was more marketable than super-insulated houses like the Waites house at C.A.T. (1973). Over the years building standards have improved but few of us come close to the zero heating houses of Hockerton and BedZED. 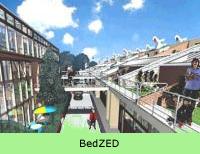 Nevertheless, before shelling out on central heating equipment, be sure that you have copious insulation in the loft, insulated cavity walls, double or triple glazing (no PVC please!) and modern ventilation.

As 50% of the nation’s energy is used in buildings it pays to get heating right. Get a home energy check and use your home energy adviser to guide you through the bewildering choice of systems and controls. Our article on renewables has more information on alternatives to conventional heating systems such as ground source heat pumps.

Gas is still the most popular fuel but as North Sea production declines future supplies will be coming from further afield. Current events (August 2002) imply this might involve military action. As consumers we will need to be responsible, demanding fairly traded fuel, local supplies and of course reducing consumption.

Mains electricity is generally unsuitable for heating because of the pollution generated at power stations generated at power stations (twice the carbon dioxide emissions of gas). Green tariffs are better but electricity is still more appropriate to drive the low powered pumps and controls which underpin the efficiency of a modern boiler. The nation can not be heated exclusively by wind and hydropower because the capacity is not there. However, there are special cases where electricity has a direct role in heating, through heat pumps, dehumidifiers and even the humble electric blanket.

A fresh prospect is domestic combined heat and power (dchp) which actually generates electricity in your home for export to the grid. These systems are just becoming commercial with units on trial in British homes at this moment. This is the most rational way to supply energy in urban environments.

If you can not wait for chp then a gas (or oil) condensing boiler is likely to be your choice. These are 20% more efficient than traditional models. But don’t assume that full central heating is necessary. If you have taken insulation seriously some rooms may not need radiators, saving space, cost and energy. For example upstairs rooms usually benefit from heat rising from the ground floor and even on cold nights an electric blanket may be all you need.

A further 20% improvement in efficiency is claimed for underfloor heating. Instead of using a radiator, hot water is circulated under your feet keeping toes warm and head cool. Users find they can lower thermostat settings by 2 degrees Celcius for the same comfort, thereby saving energy. If you are building new or refurbishing an old house, underfloor will be a real treat.

The sustainable source of domestic fuel will be biomass such as wood. For the enthusiast biomass chp is under development in California but more readily available is the traditional wood burning stove. Good management is required to avoid air pollution and hot firing is preferable to slow smouldering. Ceramic stoves have the cleanest reputation. 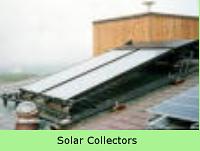 Finally passive solar heating already makes a significant contribution to space heating through south facing windows; no extra equipment required. But however good your glazing, insulated window shutters will help to keep that heat in during the night. In summer, solar collectors can supply the majority of domestic hot water needs so that a boiler may be switched off for several months.

Peter is an Environmental Engineer and Permaculture Advocate living in Cambridge. He works in housing refurbishment, renewable energy and composting.