Given the scale of the problem that we face, it is all too easy to feel powerless. How, without running for political office, can we as individuals make any difference? Surely, cutting greenhouse emissions to the extent required is the job of our governments, industry and big business. The truth though, is that the real power to tackle climate change lies not with Prime Ministers, Presidents or Chief Executives. It is in the hands of the homeowners and the car drivers, the holidaymakers and the shoppers of the world, that the destiny of our planet’s climate truly rests.

The dirty great coal-fired power station down the road may appear a prime culprit for human-induced climate change, but it’s important to remember that it’s there to provide electricity for our lights, TVs, fridges, and cookers. If we break total UK greenhouse emissions down by end user, then a quarter are from home energy use, a quarter from transport, and the rest from business and industry. Clearly, individuals can have an impact on all these sectors.

The statistics for the combined indirect and direct greenhouse emissions from households are even more impressive. For UK emissions, households directly contributed 156 million tonnes of the 718 million total in 2004, through home energy use and private transport. However, a further 457 million tonnes arose as indirect emission from households. These were the emissions from electricity generation, public transport and the final consumption of goods and services – the energy that goes into everything we buy. As such, UK households in 2004 were directly and indirectly responsible for more than 85% of total emissions. 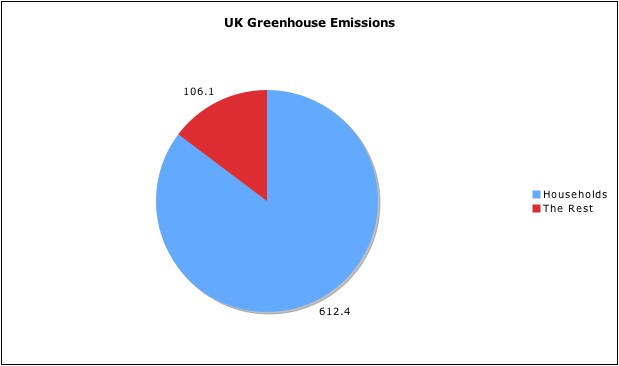 See the full report from the Office of National Statistics and a breakdown of UK greenhouse gas emissions by end user from the Department of the Environment, Food and Rural Affairs.

For every single man, woman and child in the UK, more than 10 tonnes of greenhouse gas is added to the atmosphere each year. To put this figure in perspective, it is estimated that if we are to stabilize concentrations of greenhouse gases at a level that is likely to avoid dangerous climate change than the per person allowance should be just 3 tonnes.

For a world map of per capita greenhouse gas emissions see Our World in Data. You can also check on the latest per capita emission statistics for any country via the World Bank.

The buck, then, stops with us as individuals – every kilogram of greenhouse gas that we can keep out of the atmosphere helps hold us back that bit more from enhanced global warming and the consequent impacts of climate change.